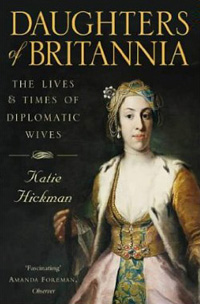 The Lives and Times of Diplomatic Wives
by Katie Hickman

In an absorbing mixture of poignant biography and wonderfully entertaining social history, Daughters of Britannia offers the story of diplomatic life as it has never been told before.
Lady Mary Wortley Montagu, Vita Sackville-West, and Lady Diana Cooper are among the well-known wives of diplomats who represented Britain in the far-flung corners of the globe. Yet, despite serving such crucial roles, the vast majority of these women are entirely unknown to history.
Drawing on letters, private journals, and memoirs, as well as contemporary oral history, Katie Hickman explores not only the public pomp and glamour of diplomatic life but also the most intimate, private face of this most fascinating and mysterious world.
Touching on the lives of nearly 100 diplomatic wives (as well as sisters and daughters), Daughters of Britannia is a brilliant and compelling account of more than three centuries of British diplomacy as seen through the eyes of some of its most intrepid but least heralded participants. 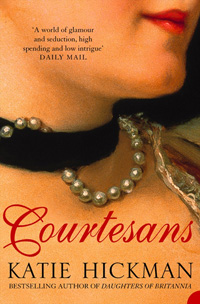 During the course of the 18th and 19th centuries a small group of women rose from impoverished obscurity to positions of great power, independence and wealth. In doing so they took control of their lives – and those of other people – and made the world do their will. Men ruined themselves in desperate attempts to gain and retain a courtesan’s favours, but she was always courted for far more than sex. In an age in which women were generally not well educated she was often unusually literate and literary, courted for her conversation as well as her physical company. Courtesans were extremely accomplished, and exerted a powerful influence as leaders of fashion and society.
They were not received at court, but inhabited their own parallel world – the demimonde – complete with its own hierarchies, etiquette and protocol. They were queens of fashion, linguists, musicians, accomplished at political intrigue and, of course, possessors of great erotic gifts. Even to be seen in public with one of the great courtesans was a much-envied achievement. In Courtesans Katie Hickman focuses on the exceptional stories of five outstanding women. Sophia Baddeley, Elizabeth Armistead, Harriette Wilson, Cora Pearl and Catherine Walters may have had very different personalities and talents, but their lives exemplify the dazzling existence of the courtesan.

Dreams of The Peaceful Dragon:

A Journey into Bhutan
by Katie Hickman

Bhutan is the remote kingdom in the Himalayas, isolated from the outside world for three centuries. The western part has been opened to limited tourism, but the eastern part remains closed. Katie Hickman is one of only a handful of foreigners ever to penetrate these eastern lands. Her trip to Bhutan with photographer Tom Owen Edmunds took a year to set up. They journeyed from the capital Thimphu in the west to the easternmost borderlands and the remote mountain-top retreat of the barbarous Bragpa people. They lived as Bhutanese, they met merchants, abbots, wandering priests, lamas, hermits, a reincarnation of the Buddha and a sorceress.
Katie Hickman’s account contains all the unexpected and humorous aspects of travel, but, above all, it is about the people of Bhutan.

________________________
Katie Hickman is the best-selling author of ten books. Her most recent work, She-Merchants, Buccaneers and Gentlewomen: British Women in India 1600 – 1900 was preceded by the highly-acclaimed series of novels, The Aviary Gate, The Pindar Diamond and The House at Bishopsgate, a trilogy set in early seventeenth century Constantinople, Venice, London, and rural Wiltshire.

She is also the author of two best-selling history books, Courtesans and Daughters of Britannia, which between them have sold more than quarter of a million copies worldwide. Her other works include two travel books, Travels with a Mexican Circus (republished by Bloomsbury in August 2014) which was shortlisted for the Thomas Cook Travel Book Award in 1993, and Dreams of the Peaceful Dragon, the story of a journey on horseback across the forbidden Himalayan kingdom of Bhutan. Her first novel, The Quetzal Summer, was shortlisted for the Sunday Times Young British Writer of the Year Award. Her books have been translated into 20 languages.

Katie Hickman lives on a converted barge on the Thames in London with her partner, the designer Matthew Ruscombe-King.